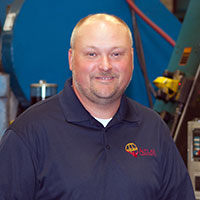 Ron London joined the Atlas Pressed Metals team in September 2016 as a Manufacturing Engineer, continuing a long career within the PM industry. His passion for manufacturing comes from his childhood where at the age of 12 he began building and flying radio controlled aircraft. He soon started designing his own airplanes and went onto win several awards locally and internationally in various competitions.

London began his powdered metal career 22 years ago when he started out as a machine operator and went onto learn the skills of die setting. He also gained experience designing tools and feeding systems over the next nine years before becoming a Manufacturing Engineer.

At Atlas, London is responsible for supervising the sizing and sorting departments, as well as managing daily manufacturing and material flow through the plant. He is also involved in continuous improvement projects, design and implementation of automation improvements, and further functions as a liaison between all departments to streamline and document feedback during the production process.

London says that his extensive experience in the powdered metal industry and his skills acquired during those years prepared him for his role at Atlas.

He enjoys being part of the Atlas Pressed Metals team saying, “I really like the family oriented environment here at Atlas.” 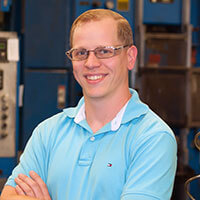 Andy Wright is from St. Marys, Pa., and joined Atlas Pressed Metals in May 2017. He attended the University of Pittsburgh, spending his summers working as a metallurgical lab intern at an area powdered metal manufacturing facility. In April 2009, he earned his B.S. in Mechanical Engineering Technology degree from Pitt.

Wright has had several roles in the powdered metal industry, and he applies his eight years of engineering experience to his new job at Atlas. As a process engineer, Wright is responsible for developing and establishing part-specific material handling protocol, including selection of proper equipment and automation. This ensures that new products are properly supported throughout the manufacturing process, from launch to full production.

Wright says that he enjoys his job and coworkers, and he looks forward to being a valued team member at Atlas Pressed Metals.

“I see Atlas as being a dynamic company that values input from all team members.  By leveraging the experience and expertise of team members of all backgrounds we will continue to grow and improve, allowing us to exceed our customers’ needs and expectations,” Wright said. 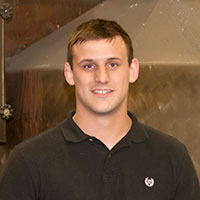 Logan Shirey has been part of the Atlas team since 2015, initially joining the company as an engineering intern from Penn State University. During his internship, Shirey assisted the senior metallurgist in the materials laboratory. He has been mentioned in a previous Atlas Pressed Metals article about the project he worked on during his internship.

In June 2016, Shirey became a fulltime employee of Atlas as a process engineer, graduating from Penn State in May 2017 with a Bachelor of Science degree in General Engineering: Applied Materials. Shirey has since transitioned to Atlas’ automation division to assist with process efficiencies and material handling, as well as providing engineering design support. He also manages and maintains the company’s 3D printers used to support Atlas’ quoting, estimating and engineering efforts and is still involved in the materials lab, working on materials-based projects or VA/VE process improvement projects.

“One of the things that I like most about my job is that I get to do a lot of different things which keeps it exciting,” he said.

Shirey says that he enjoys working at Atlas, and likes that it is a growing company that welcomes new challenges and finds new, innovative solutions to those challenges.

“I like the community involvement. For example, we have a Kids Day where employees can bring in their families and let them see how we are using technology to assist our manufacturing process. I think it’s awesome that we can expose the kids to STEM (Science, Technology, Engineering and Math),” he said.