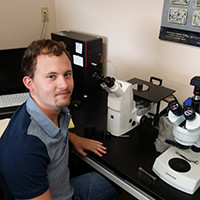 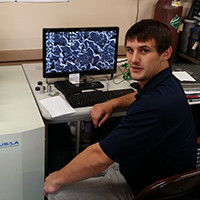 Dane Morgan of Grampian, a Mechanical Engineering Technology major at Penn State Behrend, and Logan Shirey of New Bethlehem, a junior studying General Engineering Applied Materials at Penn State DuBois, both worked for 12
weeks in Atlas’ materials lab under the supervision of Dr. Craig Stringer, Senior Metallurgist at Atlas. Both cited interest in the powdered metal field, the need for relevant experience, networking and career exploration as reasons for choosing Atlas for their internships.

Morgan’s project evaluated tensile bars that were molded and sintered at Atlas, for comparison against the industry standards. The project tested various materials including potentially new alloys, with results that will be both helpful to engineering and sales strategies, and will also be used as a basis for future data collection and benchmarking at Atlas.

“There is not a lot of tensile testing in the industry,” Morgan told members of Atlas management, sales, engineering and production during his project presentation. “This data will become very helpful in comparing Atlas standards to the MPIF standard.”

Shirey’s project was to develop an enhanced materials compressibility database. He selected six of the most common powders used at Atlas and pressed sample rings. Shirey studied and recorded dimensional change and green density factors as a function of compressibility under varying sintering conditions. Looking at data, results and trends help engineers at Atlas design tooling based on actual conditions at Atlas vs. predicted industry standards, he said.

“It was an awesome opportunity,” Shirey said. “I’m glad I did it.”

As supervisor, Stringer trained the students in using various laboratory testing equipment and facilitated exposure to the entire manufacturing process at the plant. Each morning would begin with a quick update meeting to discuss project status, results and lessons learned before discussing objectives for the coming day. The students not only conducted their research projects, but they also participated in several other department projects.

“They chose projects and jumped right in and helped with various projects on the floor – whatever needed to be done,”Stringer said.

Chuck DeLong, engineer at Atlas, added, “This was a good experience. I was impressed by their work ethic and what they accomplished when they were here.”