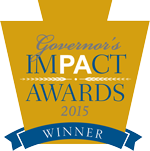 HARRISBURG, PA – Atlas Pressed Metals is being recognized for excellence as a small business and its economic impact within the Commonwealth of Pennsylvania, as part of the third annual Governor’s ImPAct Awards. Awards will be presented at a ceremony at the Hershey Lodge in Hershey on May 21.

“We are excited to hear the news that Atlas is a finalist among the many strong small businesses in the region,” Atlas president Jude Pfingstler said. “I give credit to our 92 employees for giving their best every day, helping us to innovate, grow and support our community.”

The Governor’s ImPAct Awards recognizes companies from throughout the state in five categories: Community Impact, Entrepreneurial Impact, Export Impact, Jobs That Pay, and Small Business Impact. Atlas was nominated for the Small Business ImPAct Award for its roles in product and process innovation, growth, and commitment to the community. Atlas is one of five finalists in the category and was nominated for the award by the North Central Partnership for Regional Economic Performance (PREP) network. Each of the 10 PREP regions submitted up to five nominations per category. PREP is a statewide network of partners that works to regionalize and coordinate local economic development services to businesses and entrepreneurs.

The criteria for the Governor’s ImPAct Award categories are:

Representatives from the Team Pennsylvania Foundation and Journal Multimedia evaluated the nominations and will select the award recipients.

For more information and the full list of nominees, visit newpa.com/gia.