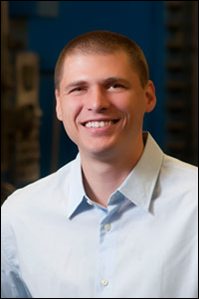 DuBois, PA - Atlas Pressed Metals President Jude Pfingstler has been named one of the Top 100 Business Leaders in Central Pennsylvania for 2015.

The Top 100 Business Leaders is a list developed by business journal “Pennsylvania Business Central,” which honors the region’s top executives, business and community leaders who have made a major impact in their community or industry over the past year. Persons nominated for this honor must have a significant impact in the business community, from job creation, building expansion and improvements, to fiscal growth or community involvement, the Pennsylvania Business Central noted.

As president of Atlas Pressed Metals, Jude Pfingstler, 38, continues to lead with the discipline that has worked for this family-owned business since 1980 – grow business around the culture of people. Treat them well, include them and relate to them, and surround yourself with strong people. At Atlas, everyone has a function in moving the business forward in success. Pfingstler said when this culture is matched with sound financial management and strategic investments, such as the company’s recent 8000-square-foot expansion, it’s a win-win combination. For example, business has doubled for this medium-sized manufacturer since the Recession.

“Our goal is not to be the largest company, but to develop a good business that provides good wages to support families that support our community,” Pfingstler said. “And as we’ve grown, we continue to be able to improve upon the caliber of people we bring on board. This makes us even stronger as a business.”

Pfingstler has worked at Atlas since he was in high school in the mid-1990s. After graduating from college, he came into the company as a customer service rep, moving up to the position of Sales Manager in 2003. He has also served as Production Manager. In 2010, the company leadership developed a strategic/succession plan, and it was at that time that Jude Pfingstler succeeded his father, Richard “Dick” Pfingstler, as president of the company. The powdered metal company serves the automotive, lawn and garden, appliance, meters and industrial and commercial equipment industries and employs about 90 people.

Pfingstler holds a bachelor’s degree in Business and Marketing from Stonehill College in North Easton, Mass., where he also received a full scholarship to play for the Stonehill Skyhawks men’s basketball team. He earned his MBA from Alvernia University in Reading. He formerly served on the Industrial Development Board for the Metal Powders Industry Federation, and is currently on the DuBois YMCA Board of Directors. He is a member of St. Catherine of Siena Church, and he and his wife, Lisa, have three children.