The Osterwalder CA/NC 1600 will provide the ability to manufacture components of up to 7 levels at the Atlas plant located in DuBois, Pa. The Gasbarre 100-ton die-set press will help to expand current manufacturing capacity while filling a role between Atlas’ 60-ton and 150-ton business. 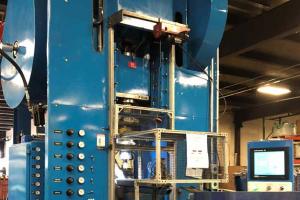 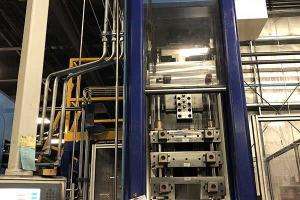 Atlas Pressed Metals, a manufacturer of powdered metal components for the automotive, appliance, lawn and garden, controls, electric motors and hand tools industries, invested in the 7-level press to expand its capabilities in complex structural parts. As the raw material, powder metal is filled into a die cavity prior to compressing the part to form, each “level” of the part is separately supported by its own punch or set of punches, and the hydraulic action can move the powder into place at each level prior to compaction. This added capability, called “powder transfer” combined with the 4 levels down, 3 levels up press, renders the new unit extremely versatile in forming complex parts with more uniformity in density throughout the part.

Technical Sales Manager Joe Pfingstler explained that in standard action mechanical and die set presses, the tooling movement is tied to the speed and position of the cam as it rotates.

“Standard mechanical pressing works well for many components, but there are applications that it can limit the ability to quickly make adjustments, or might otherwise require tooling modifications to produce a finished component,” Pfingstler said. “The combination of CNC and hydraulics allow for independent movement of tooling levels.   By freeing the tool from the rotational position of the press cam, each tooling level can move as needed in both direction and speed. This freedom provides the ability to fill, position the material, compact and eject the finished component more effectively.”

The Osterwalder press also features a tool deflection monitoring system, to allow the die setter to adjust for tool deflection that may develop within the stroke cycle, rather than making adjustments or accepting variations caused by the tool deflection. The computerized press further monitors and records tonnage per job and other press data features, which can easily be accessed for traceability as needed. Pfingstler noted this feature is an extension of Atlas’ current data collection system.

With the presses installed and now running, manufacturing floor space at Atlas Pressed Metals is near capacity. Atlas will soon be releasing details on the new expansion at the plant.