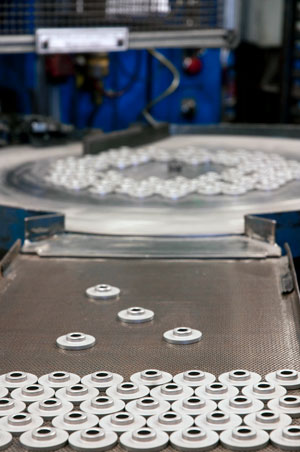 Powdered metal manufacturers expect a healthy and favorable forecast throughout the remainder of 2016, with anticipated single-digit growth, according to the State of the PM Industry in North America address presented by Metal Powder Industries Federation (MPIF) president Patrick J. McGeehan.

McGeehan, Vice President and General Manager of AMETEK Specialty Metal Products, presented industry indicators and outlook during the keynote address at the annual POWDERMET conference held this month in Boston. McGeehan began his term this year and immediately succeeds Richard Pfingstler of Atlas Pressed Metals, who previously led the MPIF.

This modest growth, noted McGeehan, follows a healthy 2015; however the industry may be moving toward a plateau in the near future, identified by looking at predictions for markets served by the powdered metal (PM) industry, namely automotive.

Conditions of the industry are measured in part by annual volumes of iron powder and stainless steel powder shipped. Total estimated metal powder shipments increased by slightly more than 1% in 2015, according to the MPIF. Industry analysts, who predict a possible market flattening in 2017, look toward automotive trends in developing smaller engines and transmissions, and in the commercialization of alternative energy-powered vehicles. Other strong end-markets such as appliance, and lawn and garden are predicted for slight growth, while agriculture and off-road markets expect to see declines, according to McGeehan.

Despite the predicted flattening of the largest market sector for PM, McGeehan remains confident the industry, with proper preparation and investment in technology, supported by research and development, will remain steady through a “stalling” U.S. manufacturing cycle.

“…One positive constant has run through this industry throughout its history. We continue to be a community of innovative entrepreneurs, engineers, and scientists who refuse to believe the critics and continue to surprise the engineered-materials community with PM’s advances,” McGeehan said. “The future remains positive, and PM is a 21st century technology that will continue providing new exciting materials with special properties and process improvements.”

McGeehan pointed to industry trends and developments that continue to push PM materials to higher densities and tighter tolerances. Advancements in additive manufacturing will play increasing roles in the PM industry. And the MPIF Technical Board continues to explore advancements in lean alloys, advanced PM steels and thermal processing, McGeehan said.